I’ve noticed that people have a very hard time admitting failure. They act as if they have never made a mistake–as if every day of their lives ended like an 80’s Saturday Morning Cartoon: A problem/villain, hero, obstacle, magic, and a moral of the story. It makes me sick.

Very few people admit that they have ever failed a class. As a matter of fact, even less people admit that they encountered a class that they almost failed. Let’s face it: if you were the only person to ever fail that class, then they shouldn’t give you a failing grade but rather an honorable mention or get-out-academic probation-free card. But you are not the only person to have taken that class, so you can’t possibly be the only one to have ever failed it. So what do I do when I am in a class that I am failing? Since I am not afraid to share, let’s talk 🙂

(a) Talk To The Teacher: This is the first thing that you should do and the most important. When I tell students this, most of the time they will tell me that they already have, or that the teacher is no help at all, or that they are afraid to. I have found that usually, the story is deeper than they care to admit. Sometimes, guys are afraid to talk to a pretty girl, but not for the reason that you think. It isn’t because she is pretty–it’s because he knows that she may have seen just how much of a jerk that he really is.

When you talk to a teacher, (1) how you decide to approach them (2) your previous encounters with them (and other teachers) and (3) how you ask the question will dictate the outcome. I have students who come in late, leave early, have excuses for everything and never take my advice. They come to me to tell me why they are doing poorly in my class and ask me what I plan on doing about it. Now stop just for a minute–do you see what went wrong already? At that moment, I have very little desire to continue that conversation. If that student had been attending regularly, was actively participating in class, and was seeking as to how they could be a part of the solution, then our conversation would take an entirely different turn. And even if your relationship with your teacher has been non-existent, starting one with a realistic and honest attitude which takes ownership of ones mistakes will create a sense of respect that could yield some pretty decent results. Remember: the teacher knows what you need to know, and they hold your grade in their hands so it is best to have a good relationship with this person regardless of how bad their jokes might be. Wanna hear an example of what to tell a teacher? Try this:

“Hello Mrs./Mr. ___________, may I have a word with you? It is about my performance in your class. I am totally lost as to how to move on from this point. I am finally learning how to study, and I have found that I really enjoy learning. I also enjoy what we have been exploring during class. For example, I like what you said last week about__________ and earlier this week about __________ because this should prove very influential concerning what I saw on the BBC about __________. But anyway, how can I truly begin to grasp the concepts in your class and learn on a successful level?”

Smells like bovine feces, but so do your grades 🙂

(b) Admit That You Are Failing: In college, a “D” is passing unless the class is required for your major. So people often take the class over and say “Oh, I am just taking the class over to get a better grade.” YOU ARE DOOMED TO MAKE THE SAME MISTAKES AGAIN IF YOU DO NOT ADMIT THAT YOU FAILED THE FIRST TIME. Our culture tends to re-name failure so that feelings are not hurt. Don’t fall for that crap–just admit the loss so that you can move on. Far too many people expect the impossible and call it hope, faith, and motivation. All three of those items require action–and if your actions have not been the correct one then you will gain nothing more than disappointment. As a matter of fact, some people who I see fail could have passed if they had simply admitted failure when it began. If you don’t admit that you are approaching a stop sign too fast then you will not slow down. You will then drive through the intersection, only to hit another driver. Had you admitted that you were going to fast to stop, you would have CHANGED your actions to match your reality. THEN, you would have had faith that your brakes would have worked… 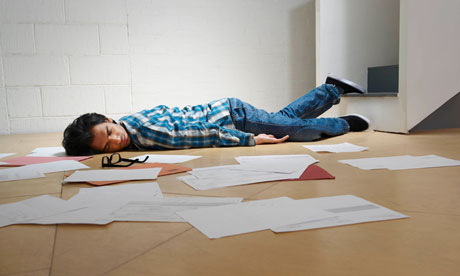 (c) Figure Out Why: I failed an Organic Chemistry class for a very simple reason. The instructor that I had was a terrible communicator, and the Department Head of Chemistry found out about a month and a half into the semester. She allowed me and other students to transfer into other sections but it was too late–the original instructor was two weeks behind everyone else so I came into the new class two weeks behind as well. When we all realized this and it was too late to withdraw from the class, I stayed in the class and learned as much as I could. I then took the class over that summer and got a confident “B”. When I acquired a “D’ in another class, I realized that I had spent too much time studying incorrectly, and studying in the worst place to study–my girlfriend’s apartment. So when I took the class over, guess what I did a little differently?

(d) Don’t Blame–Just Change: If you blame, you will never change. In my book Make It Plain: Vol. 1 (http://makeitplainforme.wordpress.com/resources-to-make-things-plain/) I talk about the fact that something as simple as a conflict between your personality and that of your  instructor’s personality can lead to a less than effective learning environment. If that is the case, then change instructors next time. But what could you have done differently? Maybe sitting in the back made it too easy to get distracted. Maybe because that instructor was very relaxed and lenient you took advantage of it and came in late far too often. Whatever the case may be, you still need to make that change. It is usually something simple like reading the material before you have the class…turning your cell phone off…recording class and listening to it within 24 hours of taping it…stopping by the instructors office and going over the test after you get the grades back…things like that can change your grade by an entire letter.

(e) How Bad Is The Damage: What grade do you need to pass? How far away is your current grade from the grade that you need? What is the likelihood that you will obtain the test scores needed even though you have not been able to do that thus far? If you do not do tip (a) from above, then you will not be able to properly answer these questions.

(f) Keep It Real: If you have scored below a 70 on each test and you need a 95 to pass, then how likely do you really think that you will get a 98 on the final? You must be realistic in this situation or you will never truly understand what just took place. If you have had simply too many things outside of the classroom derail you, then that is fine. However, you must now figure how to overcome life while overcoming the class. Tow things will be your focus at this moment–Time management and Boundaries. I have seen students in divorces, custody battles, both parents dying, mental breakdowns, diseases, pregnancies, robberies, car accidents and more–and still pass classes. When we talk, they have these two areas in check.

They realize that there are 24 hours in a day and 7 days in a week that THEY are responsible for. People claim that they have no time to study but these extraordinary people told me that it was more of studying when time was a available instead of when you want to or when it is convenient (ouch). Boundaries are all about how much of “you” will you allow others to have. If your boyfriend/fiance’ gets more time than your 4 classes then you will have a great love life and a GPA that sucks.  To fail a class is not to fail life–it is only one class. People fail in at least one area of life every day, so this is nothing new.

Successful people are not people who do not fail, but they are people who learned from their failure what it takes to become successful. If you do not do that, then you are destined to fail without purpose.